Aid da die da die! (That is an inside joke with one of my Irish friends and is not meant to insult anyone of actual Irish heritage)

Went to the Irish Heather last night in Gastown and had a blast with some friends. First off, the service is impeccable!!! Second, the food is OK, but doesn’t get my highest vote in the community of Gastown. Still, don’t be scared off by that, it is somewhere you should try atleast once.

It is a Whisky bar, and whisky they have, from all around the world. If you don’t drink whisky…tough shit, you need to try a flight when you are here. Their flights of whisky range from low to high (bottom of the barrel to the finest around town), so make sure you check it out.

Three of my companions ordered the same exact thing! The Steak & Ale pie. To our disappointment (especially the Brits), there was absolutely zero gravy inside these divine looking pies. Dry as dirt. Not sure what happened in the kitchen, but as far as I know (and the Brits) 🙂 meat pies are meant to be soaked on the inside with tasty gravy. We ended up ordering gravy on the side and it made it better, but the upset had already happened.

I, myself, ordered a cheese and meat platter with condiments and crostinis. A large part of their menu is a meat and cheese selection, so I decided it was for me. And I was not disappointed! The Brie and Cambozola were excellent, as was the schikenspeck and salami from Spain. I had picalilli and Guiness mustard on the side, which both proved to be delicious and rounded out the dish.

Also, my friend order the Scotch egg, which I have never tried before and turned out to be amazing and something that everyone should try once! 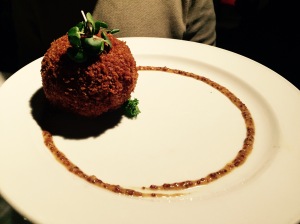 For dessert, we all shared the bread pudding, and I had a Khalua and coffee with whip cream to wash it all down. Everyone else drank their whisky and it was a happy evening. 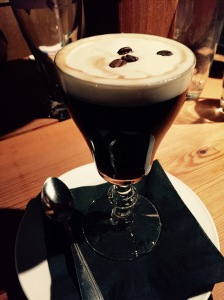